You are here:
Infoportal / 3D-Printing Methods

3D-printed objects can be manufactured with many different printing methods. All of these methods share one common principle in which they create a physical object from a file: the virtual object is sliced into layers which are then added on top of each other. Therefore these methods are known as "additive manufacturing". While most other manufacturing methods create objects from a solid block of material, 3d printing builds them up of layers of material. The finished object then consists of hundreds or thousands of layers which together may form even the most complex objects.

Every 3d printing method has its own strengths and weaknesses. In the following, we will explain how they work and what they are most appropriately used for.

Extrusion Method (FDM)
An extrusion nozzle is building the part layer by layer.

Metal Casting Method
Molten metal is poured into a mold that has been created by means of a 3D-printed wax model. 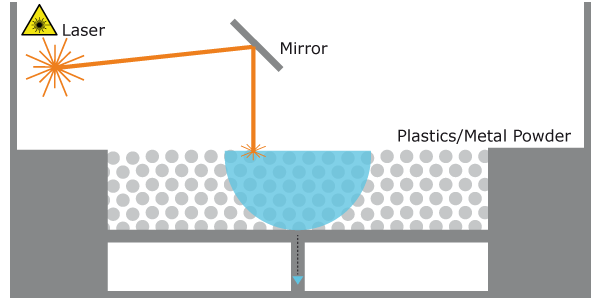 The Method
The laser sintering method starts with a layer of fine powder on the bottom of its construction space. A mechanical arm rakes the powder to form a flat surface. Now a computer guided laser beam begins to melt the powder in certain areas. The liquefied material first forms a small droplet that becomes a line when the laser starts to move across the surface.

The laser movement describes the shape of a single slice of the 3d model. As soon as one layer is finished, a new layer of powder is added on top of it and the laser begins to melt the next layer. This process is repeated until the whole object is done. The model can then be removed from the powder. The structure is stable at this point and surface finishes or colorings can be applied.

The laser sintering needs no support structures since the object is supported by the surrounding powder.

Material
Polyamide (PA12) is the standard material for Laser Sintering. In addition we offer laser sintered Alumide and TPU. 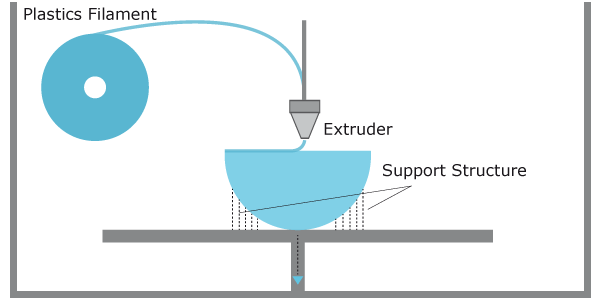 The Method
The extrusion method (fused deposition modeling) uses a fine plastic thread that is molten and applied onto the print bed by a thin nozzle. This moves along the x and y axis forming a rapidly hardening line of plastics. The computer guided nozzle creates a cut-through image of the object. When the layer is finished, the nozzle is moved upwards a tiny bit and the second layer is build on top of the first. The two layers are fused together by the heat of the second layer’s plastics. The object is then slowly built up layer by layer along the z axis. To reduce weight, the interior of the solid is filled with a network structure of variable density. We use a standard fill rate of approx. 20%.

The extrusion method is also used in many of the popular home 3d printers. There it has the drawback that the liquefied plastics cannot be placed without a base below and geometries with overhangs of more than 45 degrees cannot be built.

Modern industrial FDM machines can apply a second material at the same time. This material is used to build support structures on which the actual printing material can be deposited. The support material can later be removed easily. This allows building even the most complex shapes on these machines. 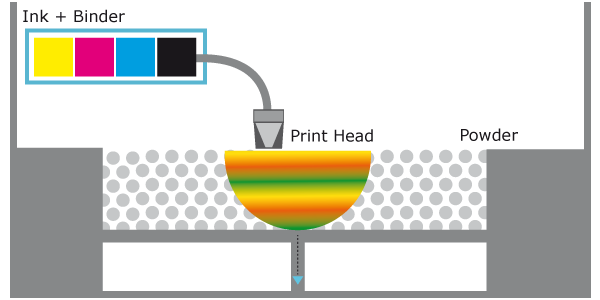 The Method
This method is most comparable with regular inkjet printing. The difference is that glue is applied onto a surface of powder. A whole cut-through surface of the model is solidified in this way before another layer of powder is applied. This layer is again solidified by glue and the process is repeated until the object is fully built up. The object can now carefully be removed from the powder. It is very fragile at this point and has to be infiltrated with epoxy or cyanoacrylate to make it stable. When the object is dried and hardened it resembles plaster or sand stone in its material properties.

The glued powder method works without any support material, since the object is supported by the surrounding powder in the print bed.

This 3D printing method is capable of printing in full color. This is achieved by applying small amounts of coloring to the glue. These models are most often used for decorative and explanatory applications.

Material
We offer plaster or grained acrylic for this printing method. 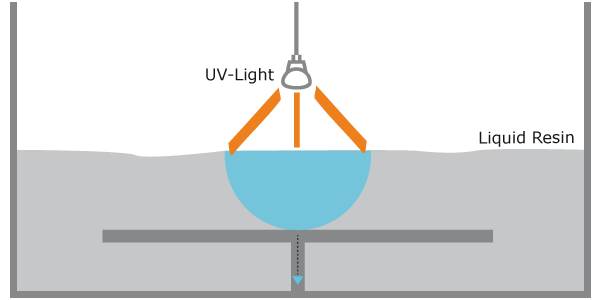 The Method
This manufacturing method uses UV light to solidify liquid synthetic resin. The light is either applied by a laser beam that moves along the liquid’s surface and solidifies a slice image of the 3D object or by light irradiated into the resin over a DLP chip as it is used in digital video projectors. The light can be applied on top of the liquid’s surface or from below through the bottom of a transparent basin. After one layer of resin is hardened by the UV light, the model is either moved down one layer into the basin (if light comes from above) or pulled up out of the liquid (if light comes from below). This is repeated until the model is completely done.

Typically this method involves the building of an additional support structure to hold overhanging parts. This can later be removed by breaking and cutting. 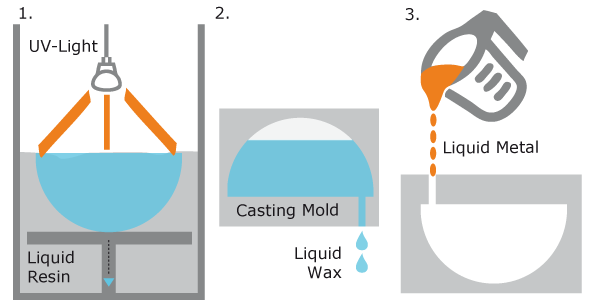 The Method
The metal casting method combines the new technology of 3D printing with the traditional way of “lost mold” casting in a two step process. First, the object is 3D-printed in a wax-like material. The Photopolymer Method can be used for this step. Additional inlet ports are attached to the model that will later be used to let out the molten wax and fill in the liquid metal. The so-prepared wax model is immersed into an embedding compound like plaster that forms a hard, heat-resistant mold. On heating, the wax is liquefied inside the mold so it can flow out of the inlet ports, what results in a hollow mold. The liquid metal is then poured into the cast until all cavities are filled. After cooling down the mold is removed by breaking it what is described by the term “lost mold casting”. After removing the metal that stayed in the inlet ports, the resulting metal object can be finished by polished to achieve a shiny surface.